Showing posts from October, 2019
Show all

The promise of pen computing 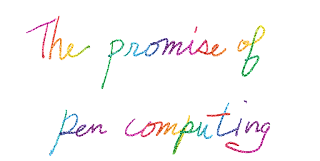 Something exciting happened in the personal computing domain of the early 90's: the GO corporation launched their PenPoint OS. The computer industry had just adopted the graphical user interface - inspired by Xerox, brought to market by Apple and copied by Microsoft - this was the way how we would use computers from now on. Fueled by this magic, visionaries (among them Robert Carr) already saw the next logical evolution in the user input interfaces: the pen! The promise of using a pen to interact with the computer was tempting to the point where Microsoft saw its nascent monopoly challenged and decided to copy once more an idea, so it went after the PenPoint OS with a special version of Windows 3.1 for pens. Similarly, Apple - not wanting to miss the boat - under the leadership of ex-Pepsi Cola CEO John Sculley, saw it's pen future in a device called the Newton. The pen computing idea was simple: why not use the handwriting that we have all known since we've ent
Post a Comment
Read more
More posts